Pusa (Piret Bergmann) was born in 1979 in Noarootsi, Estonia. She has graduated from the Pärnu College of Estonian Academy of Arts, which was earlier and also later known as Academia Non Grata. Pusa is currently mostly active as painter, exhibiting her works in many solo and group shows.

She is in recent years most widely known for her paintings featuring bright-coloured almost psychedelic patterns, which make her art quite outstanding in Estonian art scene. She is a creator of her own worlds in the medium of mostly painting, but also in sculpture and installation.

She has also illustrated and written several children`s books. Pusa is living and working in Pärnu, Estonia. She has received Ants Laikmaa Young Artist Award, the yearly award of culture of the Pärnu County in 2008 and Pärnu City Art Award in 2011 Pusa is a member of Estonian Artists’ Association (EAA). 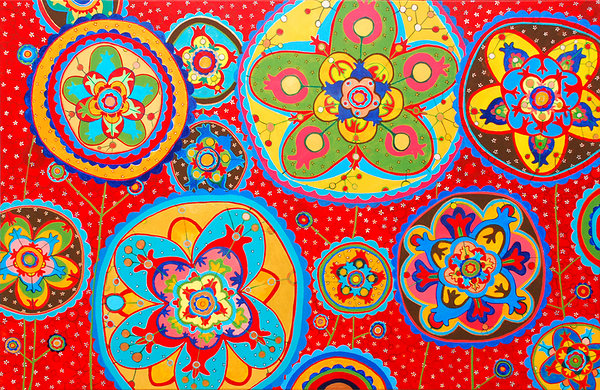